I sometimes run into the situation, specifically among my peers that are not in the interactive/marketing sphere, of having to explain that “digital marketing” does not equate to banner ads.  To us marketers, digital marketing is obviously quite a dynamic term that includes website strategy, internet promotion, social media strategy, search engine optimization & marketing and yes, banner ads too. 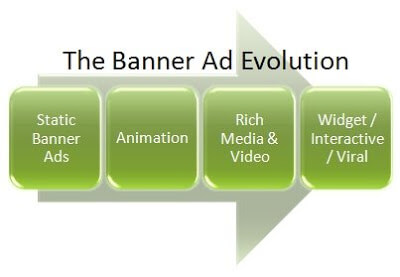 Coincidentally, I recently read a very intriguing post from the Six Pixels of Separation blog that focuses on the evolution of banner ads.  Someone raises a great point that banner ads were initially pushed mainstream because the click-through rates could be exactly measured.  In truth, click through rates for traditional banner advertisements are dismal (around 0.05%).

This got me thinking, that if banner ads are such a small part of the interactive whole, then why do they draw so much negative attention from the public?  Unfortunately, even some of the great creative banner ads are still victim to the conditioned ignorance of internet users.

Internet users first saw pop-up ads (I still shudder at the thought) and were conditioned to ignore them from then on.  No matter how rich the media, internet users have been turned off by banner ads long ago.  So what to do now?  That person poses the question, “what will it take to make banner advertising great?”.  I don’t know if the traditional “banner ad” will ever be great, but I think that if we combine behavioral targeting with super creative work, then a new sort of marginal ad could evolve.  More than simple Pay Per Click messages, but relevant and creative images that gently accompany the user in an unobtrusive way that conforms to the users’ likes and dislikes through.

All that being said, I do believe that traditional banner ads function on more of a branding and strategy standpoint.  They can deliver little reminders to your prospects about your mission, your unique offering, etc.  What I’m saying is that banner ad should not act as the sole form of digital marketing.  But will they ever gather enough strength to at least change the minds of internet users who ignore them?